The END method employs a uniquely designed closed-type clamshell bucket that features a level cutting mechanical system, along with a high-precision dredging control system, which reduces turbidity and over-dredging.

・Minimize over-dredging
The END method employs a uniquely designed clamshell bucket with a tip that can horizontally remove a thin layer of seabed sediment. Since the tip of the bucket can be set accurately at the targeted depth by the dredging control system, high-precision thin layer dredging can be accomplished.
・Cost efficient and time saving
Since the area of the bucket is relatively large, the total number of digging can be reduced, shortening the time needed to complete the dredging operation. Costs associated with dewatering or disposing of the dredged material can also be reduced.
・Preventing turbidity during dredging
Turbidity is prevented by specially designed closed and ventilated systems applied to the clamshell bucket.

Work is controlled accurately by the control system which consists of GPS to monitor the position of bucket and vessel, depth meter to monitor the depth of bucket, tide gauge. 4m3, 7m3, 18m3, 24m3 class of buckets are available. 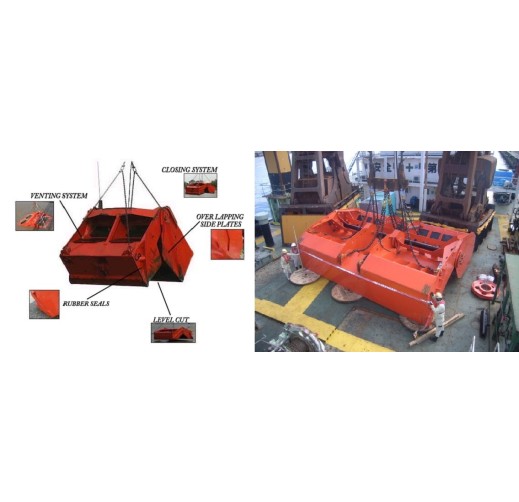